Near the end of may I decided to let go of social media, at least temporarily if not for good. I somehow didn't expect that I would have essentially withdrawal from it, first in kind of a needy must do something with my hands kind of way and then later in a sudden plummet into boredom. Since I don't ever feel bored, and my life is full of endless programming side projects, paintings, pottery, cooking and music this was pretty bizarre to experience. It felt like the withdrawal of cigarettes, the nicotine leaves quickly but the hands don't forget so easily.

I have a little routine I do for on the rare occasion I feel bored. I first recall this incredible quote:

"We have to stop CONSUMING our culture. We have to CREATE culture. DON'T watch TV, DON'T read magazines, don't even listen to NPR. Create your OWN roadshow. The nexus of space and time where you are — NOW — is the most immediate sector of your universe. And if you're worrying about Michael Jackson or Bill Clinton or somebody else, then you are disempowered. You're giving it all away to ICONS. Icons which are maintained by an electronic media so that, you want to dress like X or have lips like Y... This is shit-brained, this kind of thinking. That is all cultural diversion. What is real is you, and your friends, your associations, your highs, your orgasms, your hopes, your plans, your fears. And, we are told No, you're unimportant, you're peripheral — get a degree, get a job, get a this, get that, and then you're a player. You don't even want to play that game. You want to reclaim your mind and get it out of the hands of the cultural engineers who want to turn you into a half-baked moron consuming all this trash that's being manufactured out of the bones of a dying world."
- Terrence McKenna

While its really a bit much overall, in a way that McKenna usually is a bit much, the intro to it is what I've built my life around and when I first heard it it connected with me because it was what I already believed deeply and how I already behaved.
"We have to stop CONSUMING our culture. We have to CREATE culture. DON'T watch TV, DON'T read magazines, don't even listen to NPR. Create your OWN roadshow."
After this I consider what in my life I've been attracted to, and in this case it was storytelling. Something I've always adored and never really attempted beyond some very short writings. I've never been one to shy away from something I am ill prepared to do and I decided to go for it. I will write a Novel.

When I endeavor to replace boredom with creation I usually try to mark it with some kind of token that points in the direction I'm hoping to go. In this case it was a pen. A modest pen as far as pens go but well above the Pilot G-2 I frequent for daily note taking and works. It is a TWSBI Eco and I adore it. 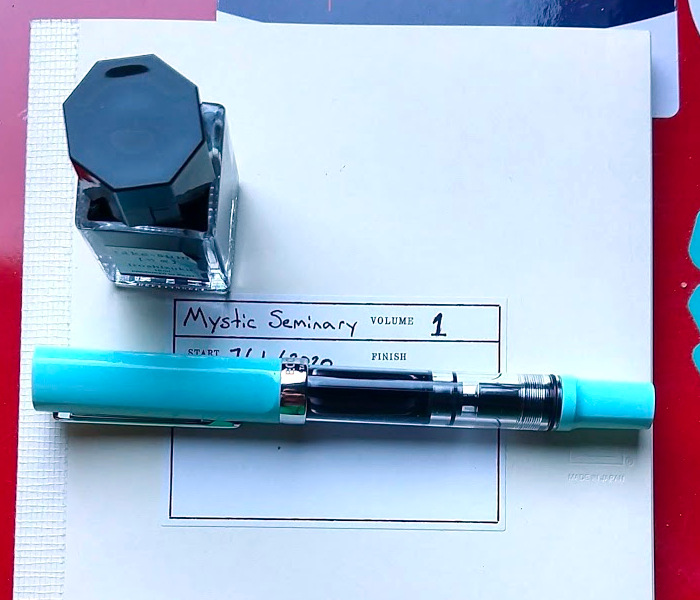 As you can see in the picture, I labeled a notebook with the title of a Novel I have been wanting to write for a long time "Mystic Seminary" a school for cursed and damned teenagers. I have been writing about 6 days a week since and have accumulated 9 chapters of what I think is a great story. I have a long way to go, but the kind of romantic ritual of writing with a fountain pen is filling my soul. I often forget about my phone now, as I have this new world I am creating that is much more interesting than what I am being sold.

I hope maybe by the end of the year I will have completed this story and maybe someday I won't even remember that "social" media was ever a thing. Then my publisher will demand I have a twitter account for fan interaction and I'll have to hire someone to pretend to be me.